Have you ever met someone who seemed one way, but then a traumatic event changed them? I've known folks who've gotten divorced who became rather hateful of the opposite sex over it, and then there's the religious conversion or conspiracy theory community that turns a person's perspective to one entirely through the focus of that new obsession. It's hard, because it makes them hard to relate to, and you know anything they do will be changed by this event.

What I'm getting at, is that I think this has happened to my age-old favorite wargaming company, Games Workshop.

It began with Chapterhouse...

Look at that, using all of GW's protected assets, like eagles, wings, and chapters

Chapterhouse was just one of thousands of third party producers of Warhammer and Warhammer 40k compatible parts, but they were one of the few with the audacity to just call something "Eldar Warseer" instead of "Star Elf Witch-kin" or something.

Games Workshop was sue-happy back then, as this was the height of the "Spots the Space Marine" style lawsuits, where anything even daring to use generic ideas like space marines or orcs were getting C&Ds without restraint. So, it was unsurprising when they came down on Chapterhouse.

What was suprirising, was when Chapterhouse essentially won. Over a long court trial, it was slowly determined that most of GWs IP is too generic to really be enforced. They don't own the concept of Orcs or Space Marines at the end of the day, and over the course of the case they even lost the ability to claim ownership to basic shapes like that of Space Marine shoulderpads.

This meant little for Chapterhouse, who could now call their miniatures an "Eldar compatible" whatevers. But, it left GW shell shocked. They never lost a case before, and this set a precendent that they couldn't just keep shutting down anyone who dared make elves with guns. Suddenly, long established IPs like Warhammer Fantasy Battles felt undefendable, being made up of just generic fantasy concepts, and generic elements of 40k seemed like liabilities to the company, who would begin changing thirty years of company history nearly right away. 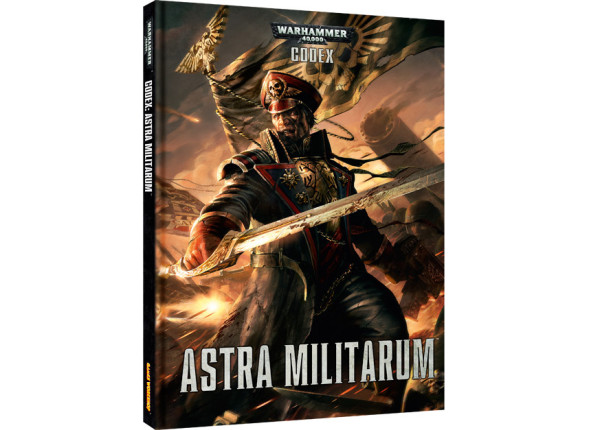 No sir, no Imperial Guard here, this is highly copy-writable Astra Militarum codex, accept no subsitutes!

Suddenly IG are AMs, and Sisters of Battle are Adepta Sororitas, and heck Storm Troopers are "Militarum Tempestus" and so on.

It was a minor issue, but it certainly stuck out like a sore thumb. The "...don't you mean Astra Militarum?" joke everytime someone said Imperial Guard on a 40k podcast sure got old quick. But, it didn't fundamentally mean anything, just a way to further distinguish the IP - really we had been calling Space Marines "Adeptus Astartes" for years, so it wasn't a huge adaptation.

That is, until Warhammer Fantasy became not only undefensible on an IP basis, but unprofitable on a sales basis. 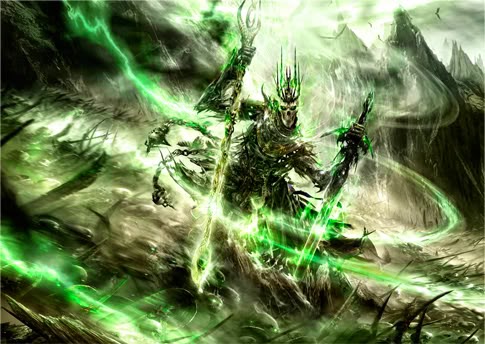 Rise, yee dark and ancients threats, and kill anything we cannot copyright!

For thirty years, Warhammer Fantasy Battles has been a backbone of the Games Workshop brands. Warhammer 40k is, arguably, just an adaptation of Warhammer to a Sci-Fi setting after all. But, it has failed hard in recent years, as the Chapterhouse lawsuit revealed that even second-string products like Forgeworld's Horus Heresy project out-sell Warhammer Fantasy.

Since I'm editorializing, I'll say why this game failed, from a fanboy with piles of it in his basement. The cost and scale reached an impossible stage. I started a Night Goblin army with several starter boxes bought on ebay some years ago, only to discover that troop blocks of 100+ were considered normal and required for that army. It's not just that I would have needed something like 30 boxes of goblins at $30 each to pull off a basic starter goblin army, it's that I would then have to convince one of the two to three people I enjoy playing wargames with to assemble one of these stupidly gargantuan armies just to push them around a table once in a great while in a ruleset that wasn't even very fun to me. Casual it isn't - you'd have to be already obsessed with Warhammer Fantasy to put up with these entry requirements. Combine that with an endlessly recycled setting that never grows or changes, and you can see why people didn't drop $60 on boxes of ten skinny little witch elves the way GW had imagined they would.

And so they brought the End Times, a series of really expensive hard back books and gigantic models telling the tales of how the Warhammer Old World fought the final battles at the end of time.

Spoiler Alert: It ends with Chaos winning, and everything being laid to ruin. The Warhammer universe is burned to a cinder, all of the heroes die, and reality is anihilated. Chaos is already bored and moves on. The End.

Satisfying, eh? Of course, it couldn't end there, right? Deploy, my extra-copywritten legions! Crush all things generic and undefensible in court!

So, at the end of this week we get the rebooted Warhammer Fantasy, in the form of Warhammer: Age of Sigmar. And, at this point, we're seeing the fully changed Games Workshop. From the confident lawsuit machine from a few years past to the generic-phobic citadel of present, this new release makes abundantly clear that this is a GW that will burn down everything it has created, in the name of making something protectable.

I should say what the premise of this new game is - the god of the human empire, Sigmar, survived, and now has brought the dead spirits of those who fought in the End Times back to fight as fantasy Space Marines, in a massive invasion to destroy the realms of Chaos.

I'm not joking about that fantasy Space Marine thing either, take a look at this: 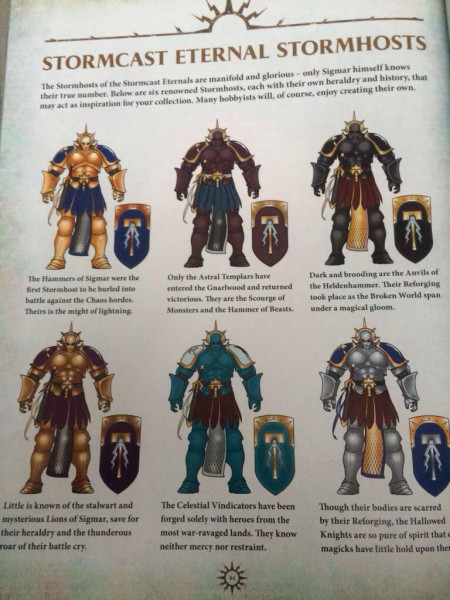 The Anvils of the Heldenhammer were "reforged" as "the Broken World span under a magical gloom."
Now that's fluff you can get behind!

So, yeah... the new Age of Sigmar box set has a bunch of golden fantasy space marines fighting an admitedly awesome bunch of Khorne themed models. But, where is the fighting taking place?

Well, on a highly copyrightable locations that are functionally meaningless, like Chamon, Ghur, and Hysh. Are these planets? Kingdoms on one planet? Extra-dimensional planes? Do people live on these worlds, or are they like heaven realms of constant conflict? I've read the fluff that's been made available like a man with days to kill in a hospital and an ipad would, and I honestly cannot say.  The fluff is amazingly gooey, with long passables like "This is the land of quarrels, where conflict has strained the daurest in times of strife." There's like, nothing there, I can't find a floor in any of it, but it's all 100% copywritable.

You know what does live on these planets, or in these kingdoms, or on these extra-dimensional planes? Well, a whole new cast of completely original and copywritable creatures of course. At time of this writing I'm aware of such armies as the... oh boy... give me a second...

Such armies as the "Orruks," the "Grots," and the "Ogors", versus such good races as the "Steamhead Duardin" and the "Aelfs." (To properly pronounce that last one, just have Pitstop Penelope from Wacky Races say "Elf.") 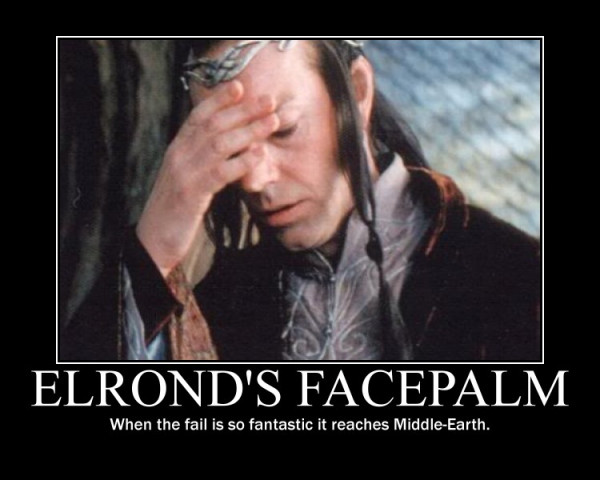 So. Jesus Christ. Yes. We've reached that point. We've reached the time of the Orruks and Ogors. I guess had I finished that Night Goblin army years ago, I'd be trying to dream up a new suitably dumb name for them in this completely different, yet somehow exactly the same universe. (I'm learning toward "Gloom Grots")

And that's the story, I feel, of how losing one lawsuit caused GW to lose their collective minds, and bin a 30 year old game that once served as the cornerstone of their company.

Meanwhile, I feel like there is a winner in this whole mess. A little company in Nottingham, called Mantic. Mantic began producing generic fantasy army rip-offs for use in Warhammer awhile back, and made considerable inroads into Games Workshop's space by offering Warhammer Fantasy type plastic models at a much lower price point and with a ruleset that required far fewer models.

Here's what one of their rip-off armies looks like: 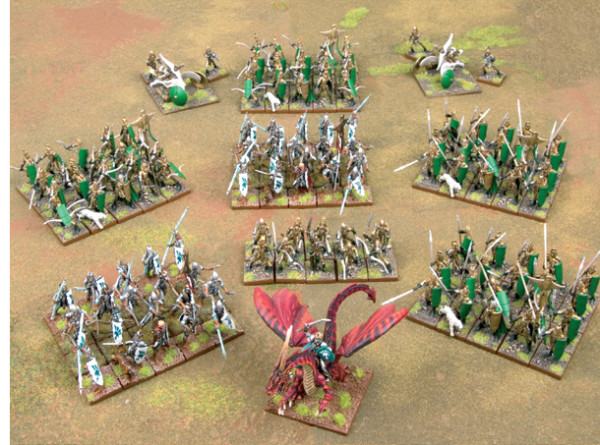 Except, Warhammer: Age of Sigmar dispenses with square bases, or ranking miniatures up, or anything that previously had been central to Warhammer Fantasy Battles. So, now "Kings of War," Mantic's generic Warhammer equivalent, is left standing as the only major game on the market produced to fill the mass fantasy battle niche.

All of this hassle to deny them IP, and in the end the generic third party compatible parts makers wound up owning the whole show.
Subscribe